Before we developed the Chameleon sensors, the Wetting Front Detector (WFD) was used to tell us how deep irrigation water had infiltrated into the rootzone. It is still useful for this purpose. However, it is even more useful as a device to measure what is dissolved in the soil water. The WFD captures a soil water sample which is extracted using a syringe for monitoring of salt and nitrate in the root zone. 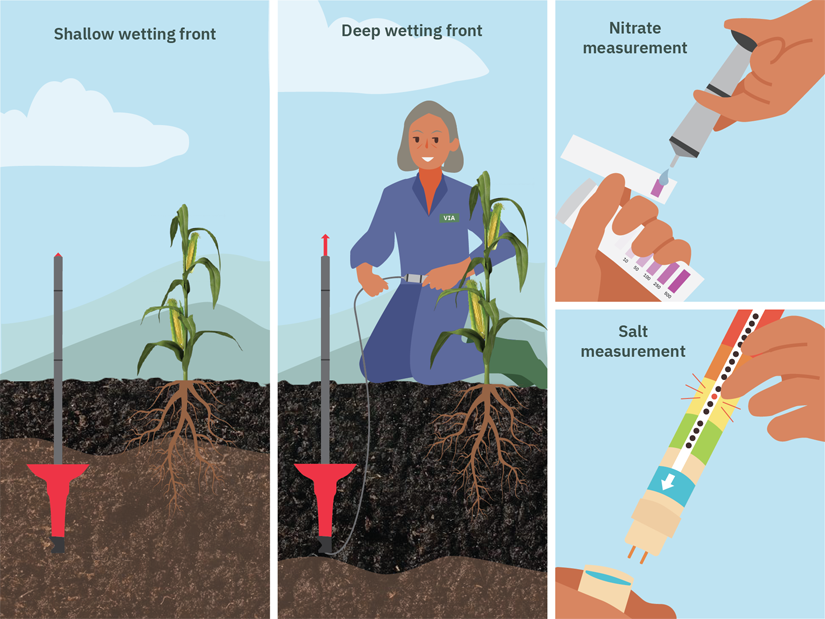 Depth of placement of the WFD is very important. If a WFD is installed too deep it will not collect a sample. If it is too shallow it will respond to every irrigation and not represent solute conditions in the root zone.

Installation depths are typically deeper for drip than for sprinkler irrigation. Depth is measured to the black locking ring, which is 10 cm below the rim of the funnel.

The Wetting Front Detector (WFD) is a 200 mm diameter funnel-shaped instrument that is buried in the rootzone. A hollow tube containing light-weight floats runs through the centre of the funnel and has a pop-up indicator on top. The indicator shows when a water sample has been collected.

A small reservoir in the base of the funnel retains a 5 to 7 ml sample of water from the wetting front. This sample is removed using a syringe through a 4 mm flexible tube and is used for monitoring nitrate and salt.

It is important to know the salt levels in irrigation water and in the root zone. Salt is measured by the electrical conductivity (EC). The VIA EC meter consists of 16 LEDs that are grouped into green, yellow, orange and red zones. Within each colour zone there are four LEDs, and the LED closest to the sample value lights up. The range is from 0.4 - 5.2 dS/m.

When WFDs are used for solute monitoring, it is not necessary to have two placement depths. It may be better to have two WFDs at the same depth in different locations.

Nitrate is essential for rapid plant growth. Unlike other soil nutrients, nitrate does not ‘stick’ to the soil particles. Nitrate moves together with the water, so over-irrigation will result in loss of nitrate and lower yields.

It is important to know the quality (EC) of irrigation water. If irrigation water is in the green zone, then salt build up in not usually a problem, unless you experience waterlogging or rising groundwater.

It is not necessary to take solute readings after every irrigation. Readings should be taken early in the season to establish starting conditions. Irrigation should then be managed carefully to avoid leaching high concentrations of nitrate and to time side dressings for when the concentrations are low.

Nitrate levels rise after application of nitrogen containing fertilisers, manure and compost, and also due to the mineralisation of organic matter. Nitrate levels fall due to plant uptake and leaching. When nitrate levels are high, irrigation amounts should be reduced to minimise the chance of leaching.

If the electrical conductivity of irrigation water is the yellow zone or above, salt will likely accumulate in the root zone. Different crops have different sensitivity to salt (EC). Salt should be leached before reaching the level where crop yields decline.

When using the Chameleon Wi-Fi System in conjunction with the WFD, the change in solutes can be visualised together with the water pattern on the VIA data platform (WFD data setup instructions). This allows you to see how irrigation practice, as shown by the blue, green and red colours, affects the accumulation and leaching of salt and nitrate.

The concentration of solute measured from the WFD is a measure of the nitrate and salt that is leaving the soil layer above and moving into the soil layer below. Thus, if nitrate or salt readings are high at a particular depth, it means that these solutes are being pushed deeper into the soil.